Reassuring and invigorating – giving a sense that, together, progress really is achievable on statelessness 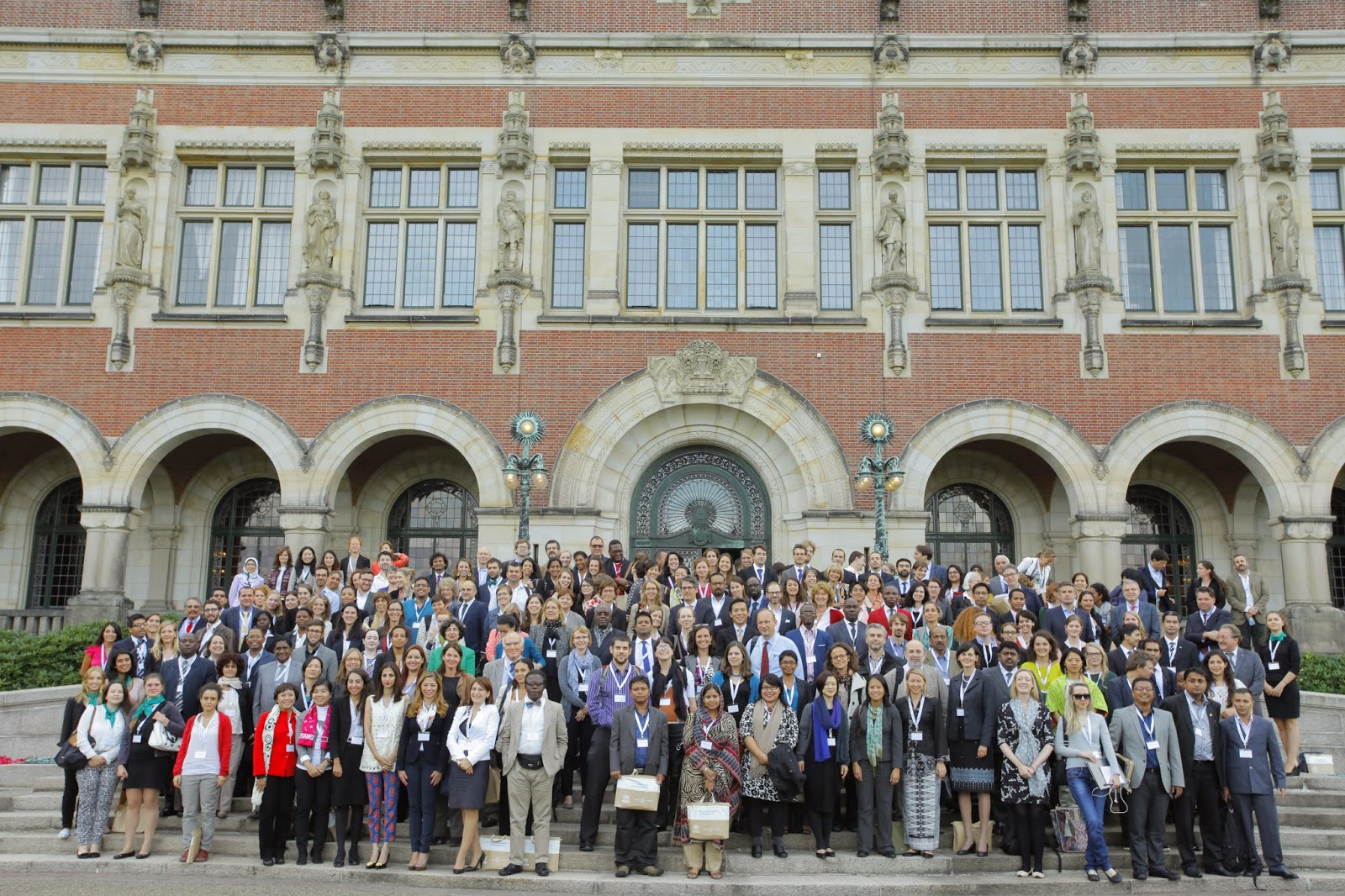 These are some of the sentiments expressed by participants of the First Global Forum on Statelessness which was convened by Tilburg University and UNHCR from 15-17 September 2014. After two years of planning and preparations, 300 participants from 70 different countries came together at the Peace Palace in the Hague to talk about one topic: how to solve statelessness. With more than a hundred presentations and many more ideas and experiences exchanged during the conference sessions as well as the coffee and lunch breaks, it is impossible to do justice to this event and to everyone who contributed to it in a single blog. But, it is also impossible to resist the temptation to share some of my own highlights from the Forum, so here are just a few of the things that stood out for me… 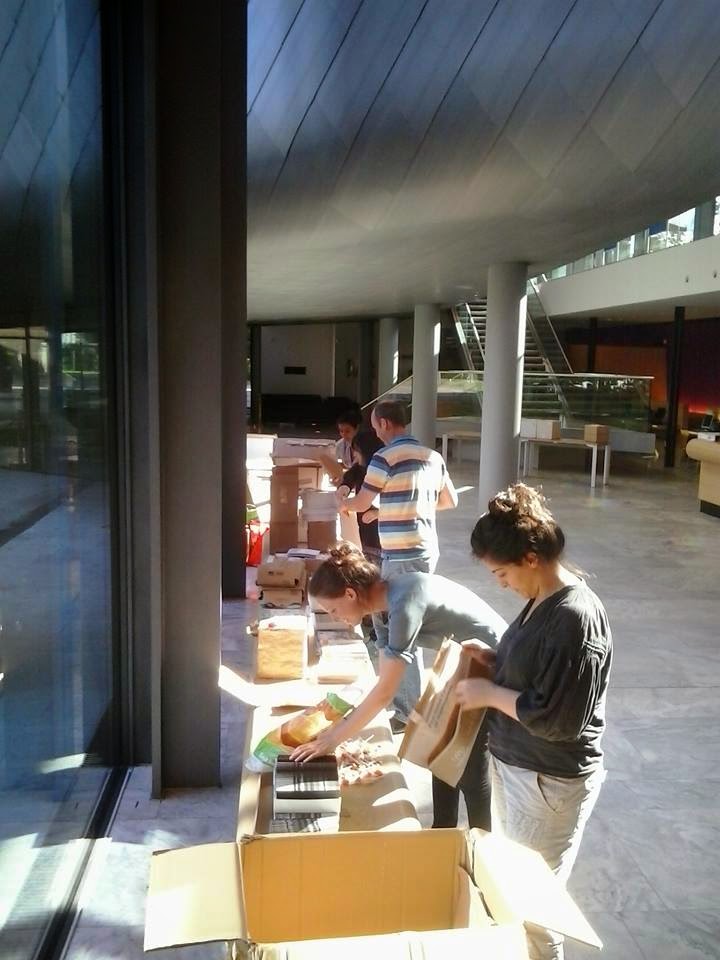 Even as we drove a rental van full of conference paraphernalia through the gates of the Peace Palace the Friday before the event to set everything up, the ‘First Global Forum on Statelessness’ still didn’t feel real. What would the venue look like once 300 people arrived? Would they indeed arrive? What would they expect from the Forum? Would we be able to meet those expectations? With such a diverse audience, not just in geographical terms, but also in the exciting mix of academics, NGOs, governments, UN, legal practitioners, stateless and formerly stateless persons, journalists and others, would the conference actually “work”? Would our ideas be relevant to one another, would we feel a sense of shared purpose and would we even find a common language to talk about the issue? These are the things our team wondered about quietly as we busied ourselves stuffing conference bags, loading the resource table with books and brochures and setting up the registration desk. 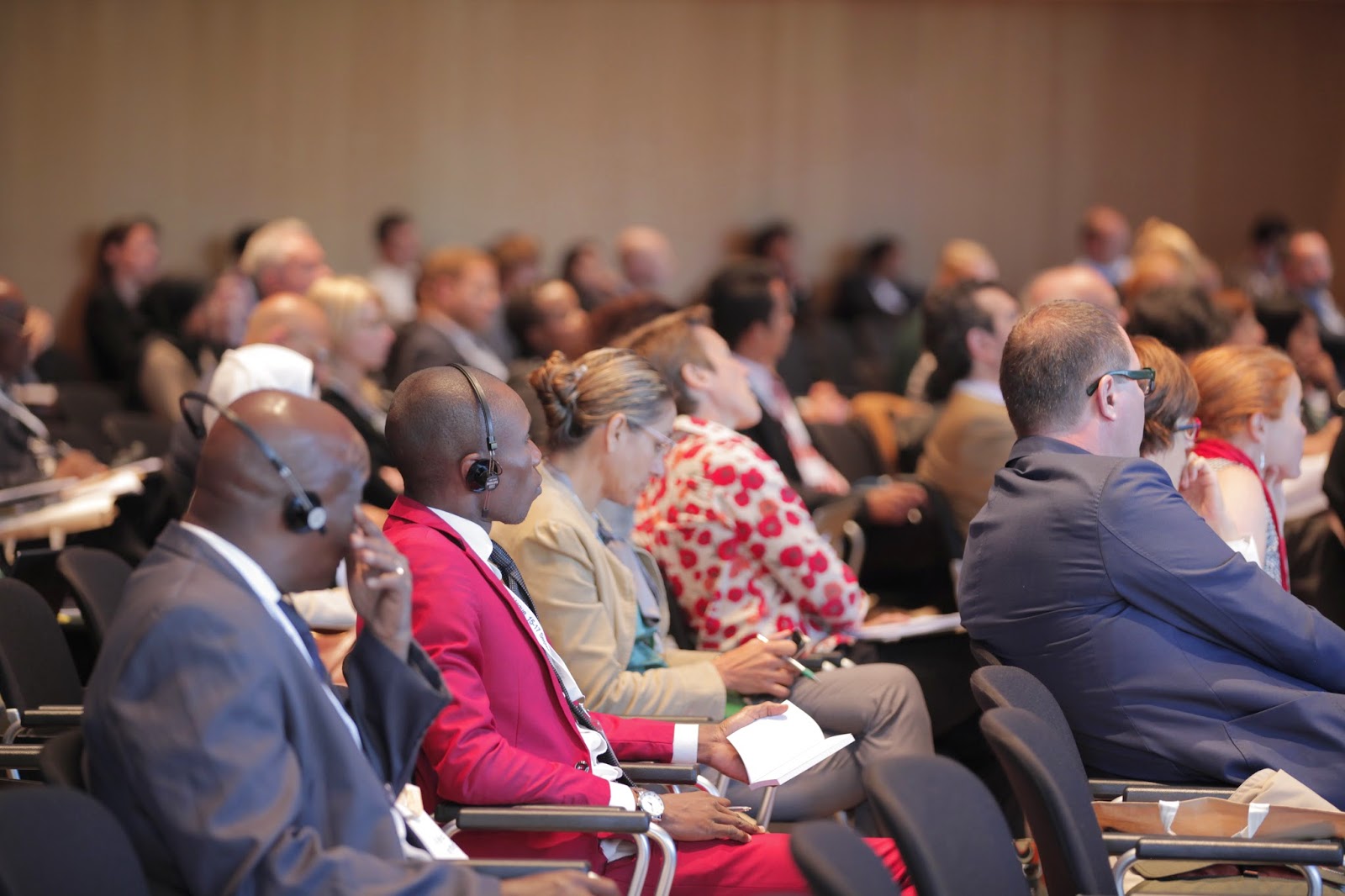 When the Monday morning of the Forum arrived, the feeling of anticipation and of nervous excitement only grew as participants queued (for rather too long, sorry about that!) to pick up their registration materials. Slowly but surely the foyer became populated with a mixture of familiar and new faces, the group swelling to an impressive crowd by the time the opening session began. I had the honour to address the plenary first and briefly welcome everyone to the event before UNHCR Director of International Protection, Volker Türk, gave his keynote speech – and I had given careful thought to what I should say for the occasion. As I climbed the few steps to the podium and took my place behind the microphone though, the force of 300 pairs of eyes, all filled with their own look of anticipation and all fixed on me, made any opening words I had come up with slip my mind entirely. For a heartbeat I worried that I would find nothing to say at all to the waiting crowd, but instead I shared the one simple thought that consumed me in that moment: that it was quite a thing to see so many people gathered to show their commitment and give their time to trying to address this long-neglected problem of statelessness (or something less coherent perhaps, but that was the gist of it). Pausing to take it all in created a picture in my mind that I will cherish. To me it marked the end of any and all residual feeling that to work on statelessness is a lonely profession! And, for me at least, that was when anticipation made way for pure enjoyment of the long-awaited opportunity to listen, to talk, to question and to debate the many different challenges and opportunities around statelessness that we face today. 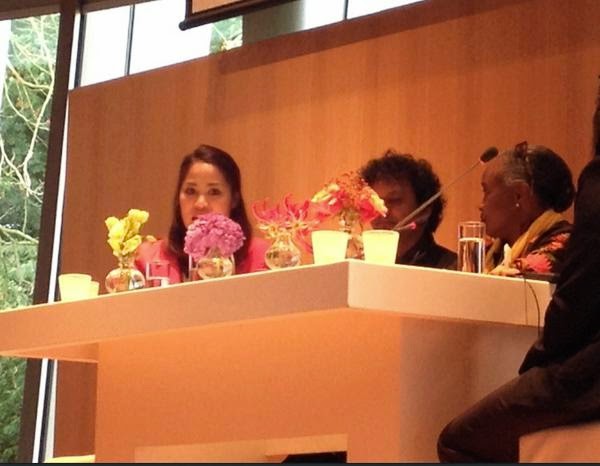 Throughout the three densely packed and intense days of the Global Forum, there was a palpable “buzz” to the atmosphere. Whether it was because it was the first such event, or the setting of the Peace Palace basked in glorious late-summer sunshine, or the backdrop of the imminent launch of the ambitious UNHCR-led campaign to end statelessness by 2024, or simply the chance to dive straight into real and meaningful discussions about problems and solutions (without the often necessary precursor of explaining what statelessness is or exploring basic questions around causes and impacts), or a combination of these factors… there was a sense of this being an event packed with not just content, but also meaning. It is without a doubt that, although the participation of persons directly affected by statelessness was sadly limited by logistical constraints, the voices of those stateless and formerly stateless persons who were able to attend and share their stories contributed greatly to this sense of a very meaningful gathering. Many people I spoke to about what they would take away with them from the Global Forum talked of the inspiration they drew for meeting or listening to the contributions of Railya, Dipu, Lara, Aor, Hasan and Juliana. It reminded us all that we need to take more time to understand not just the difficulties faced by stateless persons, but also how they experience those difficulties, how they perceive their situation and what change they would like to see or contribute to. While it will remain a challenge to convene people affected by statelessness because that very status often stands in the way of travel it is absolutely vital to do more to include them in discussing and working towards solutions – not just for them, but with them. 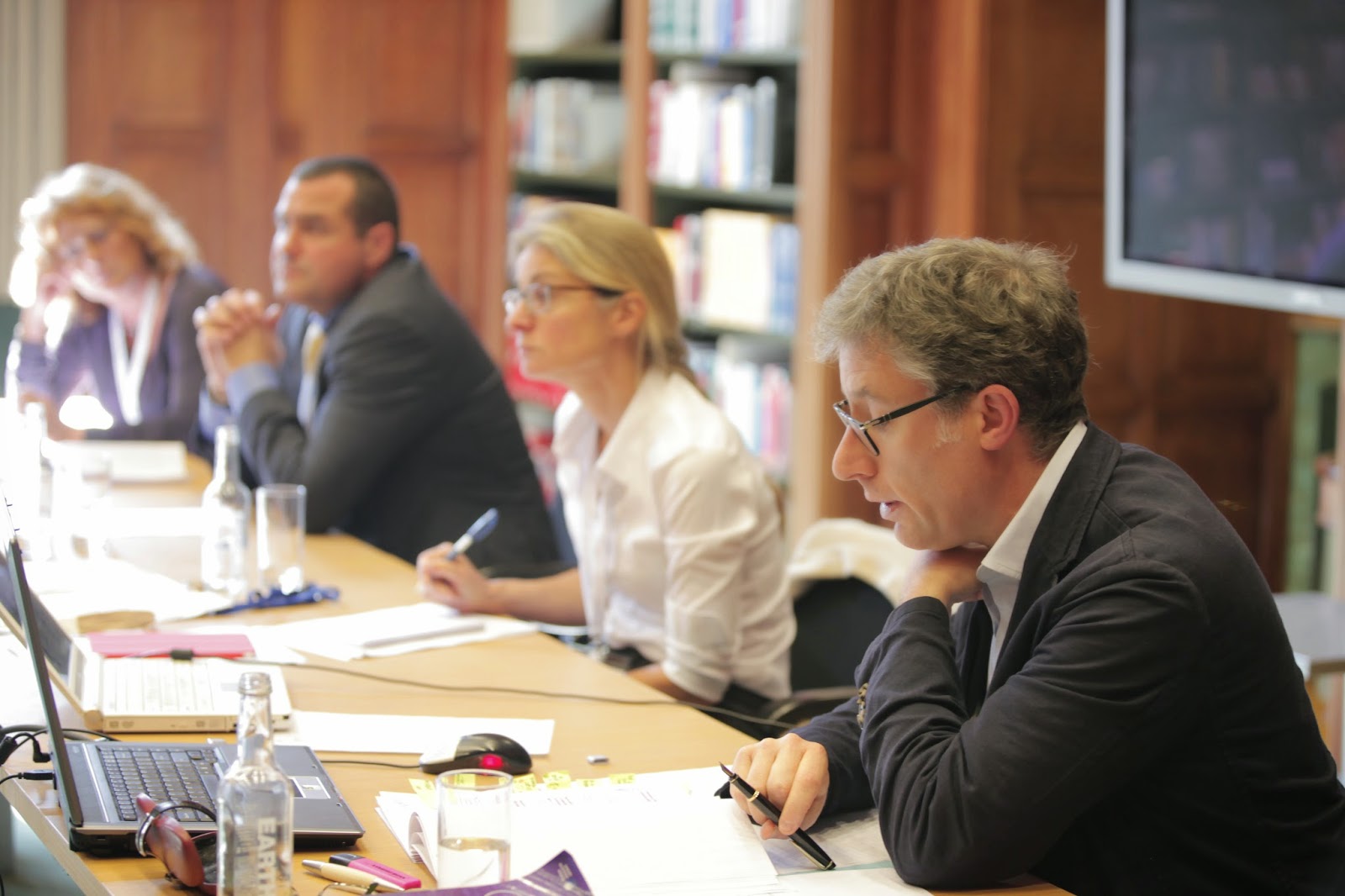 Innovation
The Global Forum was not just a site for inspiration, but also for innovation. So many of the presentations made – from the keynotes to the panels to the poster sessions – explored new dimensions of the problem of statelessness. So many people have arrived at the issue from such different directions, from an interest in the regulation of international surrogacy arrangements, to a concern about the growing use of nationality policy as a ‘tool’ in the fight against terrorism, to a desire to better understand how and why irregular or forced migration are prompting statelessness… Posters looked at country situations we have long known little to nothing about, like statelessness in Madagascar, Saudi Arabia, Cambodia and Iran. The occasion of the Forum was also seized upon as an opportunity to launch or announce new statelessness initiatives. The launch of the new Cambridge University Press publication ‘Nationality and Statelessness under International Law’ was celebrated – as Professor Linda Kerber’s generous and beautifully crafted introduction pointed out, exactly 55 years after Paul Weis’ work of a similar name was published just as the UN was then debating a convention to eliminate statelessness (i.e. what became the 1961 Convention on the Reduction of Statelessness). The re-launch of the European Network on Statelessness, a thriving civil society network of organisations and individual experts committed to addressing statelessness in Europe, was celebrated as the Network has just completed the important step of establishing as an independent Charitable Incorporated Organisation with a revised structure and ambitious plans for the future. And the establishment of the Institute on Statelessness and Inclusion was also announced and celebrated, with the beginning of a consultation process through a ‘wall of BIG IDEAS’ and collecting feedback on online support for future networking and information sharing on statelessness that the Institute hopes to set up. This Institute, by the way, when it starts its work in earnest on 1 January 2015, will be my exciting new home and will continue and build on the work of the Tilburg University Statelessness Programme which is being reinvented, strengthened and expanded through this new, independent initiative – but more on that on another occasion. 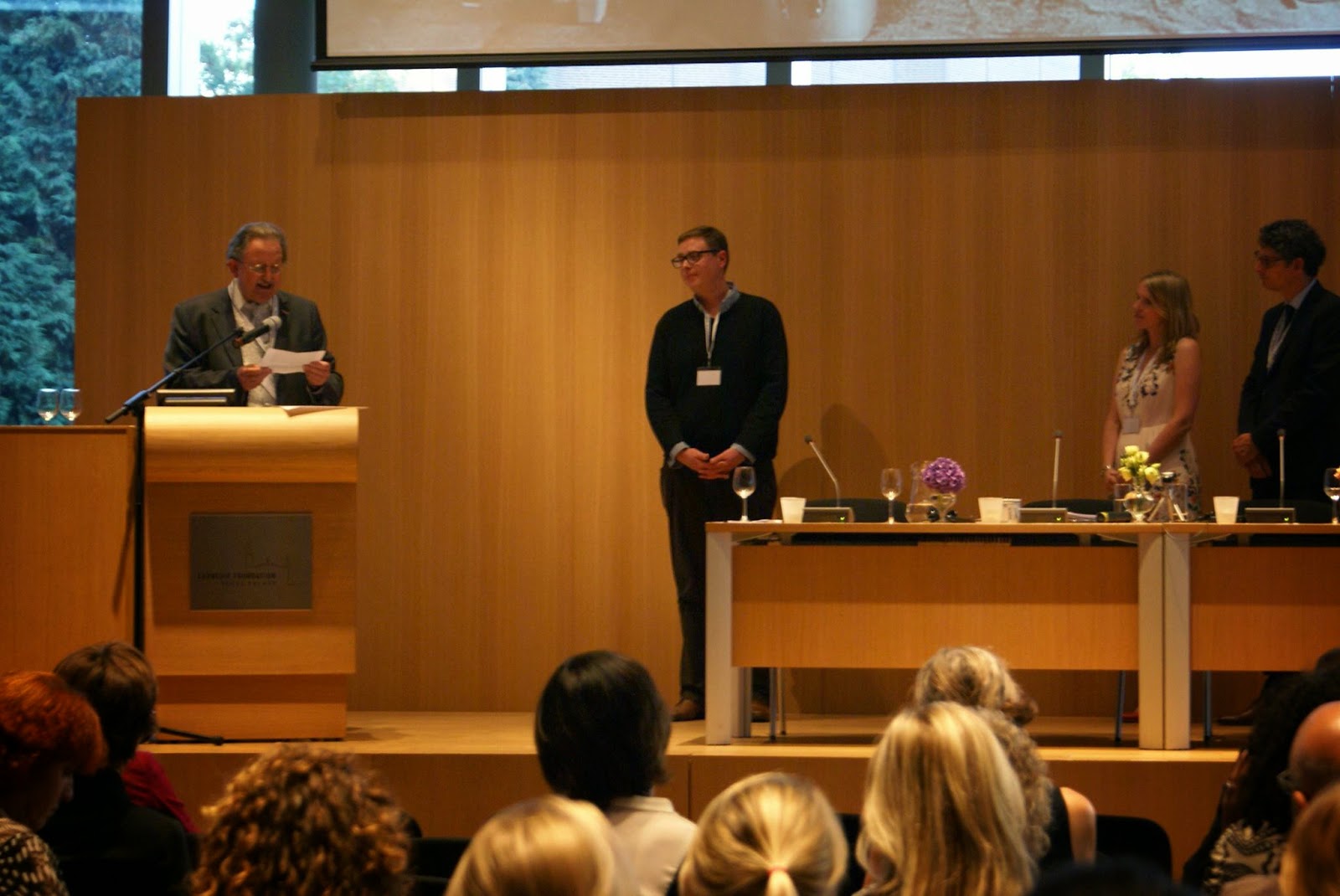 Participating in the Global Forum was, in itself, a motivating experience, but for some there was an added incentive – or perhaps, better said, reward – for the work they have put into this issue. The 2014 UNHCR Awards for Statelessness Research were presented during the closing plenary, honouring the best student research on statelessness at undergraduate, graduate and doctoral levels completed in 2013-2014. Last year, when these awards were inaugurated, the ceremony was a virtual one as the recipients were spread out in different locations around the world. This time, however, the Forum had brought so many people working on statelessness together in a single place that as luck would have it, all of the award recipients could be addressed in person. Professor René de Groot did a masterful job of presenting the Jury Report and delivering the award certificates on behalf of the team of international academic experts who assessed the nominated work. Two students from Tilburg University were among the winners, including one of the Global Forum’s conference hosts in fact – Maria Jose Recalde Vela – whose undergraduate thesis explored the relationship between identity and nationality, from a legal and socio-psychological perspective. But it was particularly special to see the prize for best doctoral research on statelessness presented for the first time, awarded to Dr Jason Tucker for his PhD thesis completed at the Department of Social and Political Sciences of the University of Bath, entitled Challenging the tyranny of citizenship: Statelessness in Lebanon. Next month, a series of special blog posts will be dedicated to the winners of the 2014 UNHCR Awards for Statelessness Research and we also intend to post a video of the award ceremony when this is ready. Meanwhile, I hope that even if there may not be a similar occasion at which to present the certificates in the years to come, the awards will continue to motivate students to contribute to identifying and investigating critical questions in the field of statelessness.

While 300 people gathered in the grounds of the Peace Palace for the Global Forum, many more followed the event in some way from a distance. Participants at the Forum shared some of their experiences and lots of snapshots from the event through twitter and facebook, using the hashtag #statelessness2014 (more than 500 tweets went out with this hashtag over the 3 days of the conference). Emma Batha, journalist with the Thomson Reuters Foundation, not only participated in the media panel at the Forum but also filed a series of stories before and during the event, helping to highlight some of the current challenges as well as to draw attention back to the human impact of statelessness. Several Dutch newspapers, including Trouw and NRC Next were prompted by the Global Forum to run their own stories about statelessness and there was some national radio coverage. The Guardian, Newsweek, Channel News Asia and Al Jazeera’s Inside Story also all reported on the issue and the Forum. This dissemination of information through the media and the enthusiastic sharing of photos and experiences by participants of the Forum within their own personal and professional networks creates an important ripple-effect, generating a better understanding of the phenomenon of statelessness within a much wider circle of people. Already we have had lots of additional sign-ups to the post-conference mailing list and we will now take up the task of developing the space and the tools for a continued conversation on the issue.

That leaves me to end this blog by saying a massive thank you to everyone who contributed to make the First Global Forum on Statelessness a success, whether it was by sharing your expertise, posing a question, spreading the word or in another way. And most importantly, let’s stay in touch!